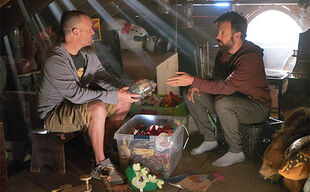 Reunited and it feels so good.

30 Years of Science Down the Tubes
Tandy and Mike grow closer than ever. 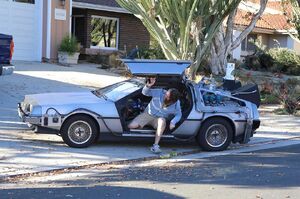 Tandy says goodbye to Carol as he drives off in a DeLorean to his childhood home in Tucson, believing Mike may be there. After arriving and entering his childhood home, his theory is correct that Mike is there, however, he finds Mike in an un-moving state. However, Mike springs up and scares Tandy, as he reveals it was to prank him. Later that day, Mike and Tandy go through some old memorabilia. They begin to dig through the box where Tandy finds an old experiment of his where he farted into a jar to open thirty years in the future. Mike tries to explain to him that the fart has dissolved, however, Tandy desperately believes that it's still there. As he opens the jar, Mike silently farts, much to Tandy's anger that Mike ruined his experiment.

To get back at him, Tandy pretends to catch Mike's sickness by putting hot sauce into his hand. Tandy continues to joke around, Mike tells him to stop, but it leads to Mike admitting Tandy takes nothing seriously. As Mike tells him to be honest, Tandy tells him he dislikes his haircut. Feeling bad about it, Mike cuts his hair and gives him a new look, much to his happiness. When he eventually finishes, Mike tells him to leave, but his joking turns into him lashing out at Tandy about how his life has been a mess and a joke. 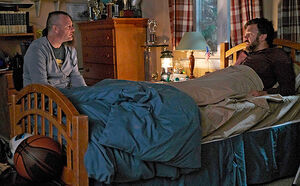 With Tandy upset, Mike goes out to apologize to him and the two patch things up. Heading inside, Mike notices his parents' graves, learning that Tandy had to bury them. Feeling bad that he had to bury them, and a tombstone for himself believing that he had died, Mike requests as his "dying wish" to go back to Malibu. As they part ways, Mike gives him a new fart jar to open in another thirty years. After hugging it out, Tandy decides to give him his sports ball collection since "they" helped him when he was alone. The two part ways with Mike staying in Tucson and Tandy heading back to Malibu.

Meanwhile, the group becomes irritated that the baby calf is making noises. When they head outside, the group notices the drone. When it returns later that day, they try to make peace with the controller by holding up signs, but their attempts at communication are shortly stopped when Melissa shoots the drone out of the sky. Later that night, Melissa accidentally almost shoots Carol, believing that an intruder had come in. As Melissa pleads that the world is pretty much done for, Carol tells her it is just beginning with the new babies coming along. However, due to her almost shooting Carol, she is locked in the stocks. 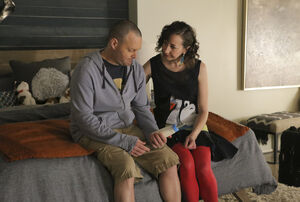 After Tandy arrives home, he eventually gets the calf to drink from its milk bottle, something Carol had been trying to do the past three days. Carol then begin to plead that he'll be a great father, much to Melissa's happiness. Meanwhile, Gail notices a boat docked near the mansion and calls the group over towards the window to look at it. As they continue to look at it, they notice Pat Brown and two other armed intruders heading their way.

Previous Episode /// 30 Years of Science Down the Tubes \\\ Next Episode

Retrieved from "https://thelastmanonearth.fandom.com/wiki/30_Years_of_Science_Down_the_Tubes?oldid=9122"
Community content is available under CC-BY-SA unless otherwise noted.