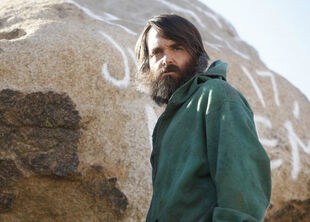 Alive in Tucson
Phil Miller travels around the United States for another human being, after a virus has wiped out humanity completely. 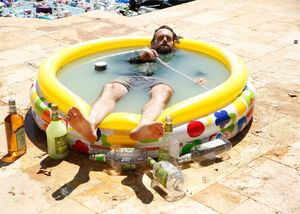 Approximately one year after the virus in 2019, that has wiped out humanity, lone survivor Phil Miller travels around the United States for any signs of human life. While on his trip around the United States, Phil posts "Alive in Tucson" messages on city and state billboards in a way of contact. After finding no survivors, Phil decides to return to his hometown of Tucson in his small apartment. But immediately takes his RV and breaks into a residential community with mansions.

After settling into his new home, Phil enjoys himself in a parking lot by bowling with fish tanks, lamps, and even crashing cars into each other. But after five months, Phil's fun begins to slowly decrease, due to his loneliness. Without a companion or anyone to talk to, he begins to talk to sports balls with faces on them. After celebrating his birthday alone, Phil heads to a shop with a mannequin inside glass. He flirts with her, but when the mannequin falls over, Phil realizes he is slowly becoming insane and decides to commit suicide. 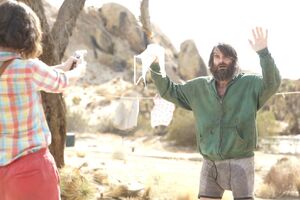 After painting a red target to crash his truck into, Phil parts ways with his sports balls and planet Earth. Entering his truck, Phil takes a chug of alcohol and begins his plan. But right before crashing, Phil sees a smoke signal nearby, and immediately applies the brakes and gets out. Rushing over to the campsite, he sees the undergarments of a woman. He begins to rub them on his face, but then passes out. The delusional Phil fantasies a pretty woman, but in reality, Phil wakes up to see a different woman attempting CPR on him. Misunderstandings cause the woman to take out her gun on Phil, but after explaining poorly, Phil gets her to calm down, and she reveals her name to be Carol Pilbasian.

Retrieved from "https://thelastmanonearth.fandom.com/wiki/Alive_in_Tucson?oldid=6892"
Community content is available under CC-BY-SA unless otherwise noted.