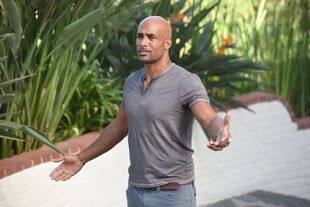 Phil is shocked that Erica is pregnant.

Baby Steps
Everyone finds Phil to be the new tool of the group. 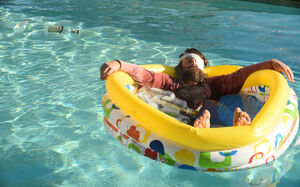 With the announcement of Erica being pregnant, Phil attempts to apologize to Erica for his mistakes. However, Gail kicks him out of the room, before he can. While the crew eats lunch, they send Phil to go away again. As Tandy swims in his margarita pool, he finds Phil has built many wooden toys for the baby.

With the group shunning Phil, Tandy attempts to get the crew to feel sympathy for him, as he is no longer the "tool". Tandy pretends to have a black eye from his beating. Feeling some sympathy for him, Gail asks Phil to get her some tortilla chips. Tandy and Todd head to the grocery store where Tandy accidentally reveals to Todd that him and Melissa were going to have a baby themselves, which causes them to no longer trust each other and breakup. 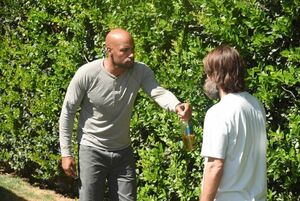 Returning with Gail's tortilla chips, Tandy finds Phil attempting to place the toys into a trash can. Phil attempts to talk to him until Phil reveals that he regrets saving Tandy from the billboard, emphasizing his belief that everyone is worse off for having met Tandy. Talking with Erica about her baby, Carol believes she may be pregnant and tests herself to see if she is. As everyone is alone getting ready to sleep, Tandy heads to go to sleep himself and looks into the room where Phil was building the wooden toys, and finds many empty beer bottles.

Looking on the beach, Tandy finds Phil intoxicated and laying in the ocean, where he is about to drown. Tandy tries to wake Phil up, but fails to. Using Melissa's surfboard, Tandy gets Phil onto the surfboard. While dragging him to the mansion, Tandy apologizes to the unconscious Phil for his misdeeds. Tandy finally arrives at the mansion and locks Phil in the stocks. As Tandy heads to bed, Phil wakes up and screams Tandy's name for locking him in the stocks.

Retrieved from "https://thelastmanonearth.fandom.com/wiki/Baby_Steps?oldid=9112"
Community content is available under CC-BY-SA unless otherwise noted.