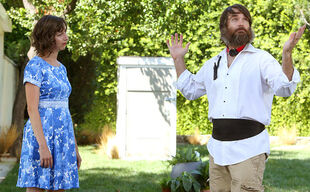 C to the T
Tandy finds redemption when he saves the day. 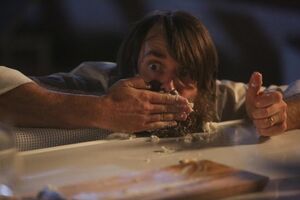 Tandy continues to suffer in his locked stocks as he asks for some water, which Melissa brings him, but cannot drink. Phil scares him with a loaded gun, leading him to wet his pants. Carol brings a change of clothes and requests that Phil be unlocked. The survivors suggest otherwise and Tandy suggests himself to be punished for five weeks. They decide to move him to the exercise room for the five weeks. As Melissa and Carol talk, Tandy sees them eating fresh cheese from the cow, and sneaks out at night to steal it. However, he knows that it is more important to be loyal to the survivors, but finds himself caught by Melissa.

Tandy soon gets his punishment upgraded to a shock collar. Carol attempts to make Tandy more comfortable while punished, but would rather suffer. Tandy attempts to talk to Gail, Erica, and Melissa, but annoys them in the process, resulting in him having to wear a more dangerous collar. Carol talks with Tandy, who hates his punishment but wants the group to have sympathy for him. Melissa soon brings him some beers, but places them where he cannot reach. Tandy attempts to communicate to the gang by throwing plants onto the mansion deck, and is lectured by the gang for his actions. Tandy attempts to use charades to explain how he feels, but is locked in a metal booth by Phil as if he wants to act like an animal, he may as well be treated like one. 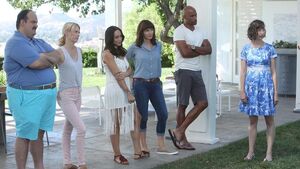 While in the booth, Tandy notices the house accidentally lit on fire by a torch. He escapes his metal booth and runs from the pool to the fire, while getting shocked and sprayed. Tandy finishes extinguishing the fire, and returns to the booth. The gang notice the fire and question who put it out, and realize it was Tandy. Using charades and Carol speaking for him, he admits he put out the fire. Carol gets him redemption for saving the day. Phil removes the collars and Tandy thanks everyone, but is only shown sympathy by Carol, as the others walk away.

Meanwhile, Todd is seen sneaking out of the mansion, several times throughout the episode, to a nearby house. As the episode ends, Todd walks into the house saying, "Daddy's home."

Retrieved from "https://thelastmanonearth.fandom.com/wiki/C_to_the_T?oldid=9109"
Community content is available under CC-BY-SA unless otherwise noted.