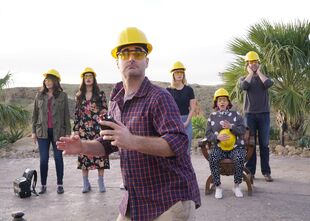 Get your non-soft hats on.

Cancun, Baby!
Tandy and the group embark on a new destination. 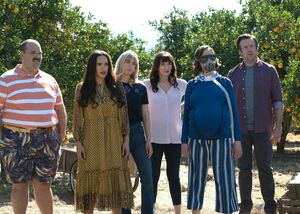 Tandy and the group say goodbye to Zihuatanejo with their plan to head to Tapachula by train to pick up the remaining goats and then Cancun. Tandy kills the two goats in an accident with detonating the house and Melissa and Todd leave a self-driving car for Jasper. When they arrive in Tapachula, they discover the goats are missing. Tandy and Mike set out to find them and spot a house. Later that night, Tandy takes his robot dog Clancy for a walk. He returns to the house where Clancy's batteries corrode. When he digs a grave for Clancy, a real dog appears and runs off.

The next day, the goats come back and they head off for Cancun. Mike spots the dog that Tandy saw last night. Tandy runs out of the truck and digs a future grave for himself. He explains that everything they need is in Tapachula with fresh food sources and that the way they are living has reached its expiration date. Tandy and the group decide to reside in Tapachula. Tandy disconnects the train from the truck and gives Mike the keys to go out and find his own happiness. He cuts off his rat tail as a parting gift and Mike gives him his armpit hairs. Tandy returns to the truck and expresses his happiness, but his happiness is shortly stopped as the group discovers themselves surrounded by the people from the underground bunker.

Retrieved from "https://thelastmanonearth.fandom.com/wiki/Cancun,_Baby!?oldid=9473"
Community content is available under CC-BY-SA unless otherwise noted.