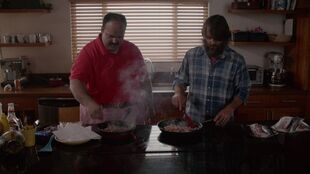 Crickets
Phil finds that Todd is hiding a big secret. 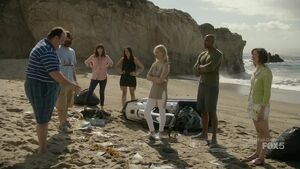 Tandy welcomes himself back to the group, after the events in "C to the T", only to be interrupted by the sounds of chirping crickets. As the food supply is running dangerously low, due to the expiration dates, Carol cooks a cricket stew, to everyone's disgust. While searching for more crickets, Tandy sees Todd walking to a near-by house. Following him there, Tandy finds a freezer full of frozen bacon. Instead of telling on Todd to the rest of the group, Tandy has Todd share the bacon with him.

After eating all but three packs of bacon, Tandy tries to convince Todd to give them to the others. After Todd refuses to give the bacon up, Tandy goes behind his back and gives them the bacon. Tandy attempts to get rid of the evidence by sending the empty packages out in the ocean, but the packages soon return to the shore. Todd attempts to tell the group the truth, but Tandy lies to defend Todd. The two are locked in stocks where they reclaim their friendship. 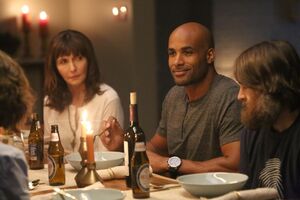 Meanwhile, Phil frequently hits on Carol, causing a tension between Carol and Erica. The two soon reconcile their argument, after Erica calls out Phil's behavior. Also, due to the food supply running low, the gang attempts to find food that is still safe to eat. While doing so, Melissa cuts her finger open on a can of food and needs stitches. Gail offers to do it, but Melissa fears that Gail may be too drunk to stitch the wound. Melissa eventually allows Gail to stitch the wound after she proves she is capable to do so.

Retrieved from "https://thelastmanonearth.fandom.com/wiki/Crickets?oldid=9110"
Community content is available under CC-BY-SA unless otherwise noted.