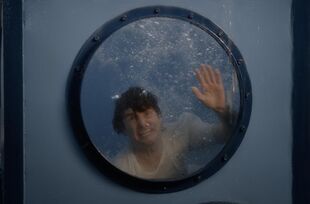 Phil sets up a dunk booth to make amends.

Dunk the Skunk
Phil gets the chance to sleep with both Carol and Melissa for re-population purposes. 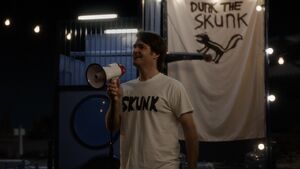 Phil is unsure of how to tell Carol for his feelings for Melissa, since Carol and Melissa are happy with their newfound friendship. Phil then tries to come up with a way to sleep with her. Phil goes to Melissa's house to tell her his plans to sleep with her for "repopulation" purposes. But when Phil accidentally admits to Carol that he told Melissa about this already, and that Melissa is horny. Phil realizes what he has done and attempts to reunite the girls by setting up a dunk tank. But after three hours, he gives up. He gets out and finds Carol and Melissa wanting to talk to him. They agree to let have Phil have sex with Melissa for official re-population purposes, but only at certain dates. Phil then runs to his house to scream in his excitement.

While on his date with Melissa, Phil plays the guitar for her which sets off fireworks. Meanwhile, an unknown survivor is seen driving through Tucson in an attempt to find the writer of the billboards. He soon sees the fireworks set off by Phil. He eventually reaches Phil and Melissa and interrupts their date by revealing his name to be Todd.

Retrieved from "https://thelastmanonearth.fandom.com/wiki/Dunk_the_Skunk?oldid=7936"
Community content is available under CC-BY-SA unless otherwise noted.