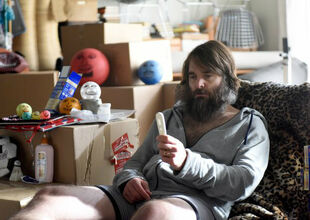 Tandy finds he is sterile.

Fish in the Dish
Tandy is forced to pass a fertility test in order to repopulate with Carol. 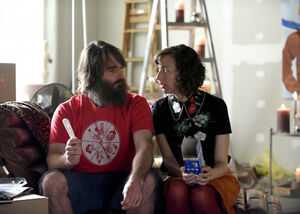 Carol continues through the night to find out why they aren't getting pregnant, proceeding her to ask Tandy some questions that might help her understand so. When Tandy heads to the "Masturbatory" to attempt again, he discovers Todd's sperm there, leading him to find Todd's sperm positive, and finds that he is in fact sterile and decides to lie to Carol about the tests being expired. As he continues to try, he lies about it being positive, making Carol believe she is the reason why that they can't get pregnant. 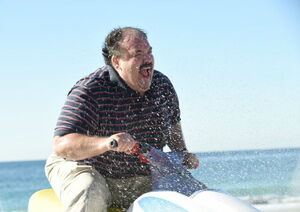 Meanwhile, Todd has finished having sex with Gail, but is currently worn out as he has been having continuous sex with both Gail and Melissa. As soon as he comes out of Gail's bedroom, Melissa wanders towards him and tells him to come to her bedroom to have sex, much to Todd's dismay. As Todd tries to come clean to Gail, Gail thanks Todd for helping her through Phil's death and admits she had disposed of her Gordon dummy, but Gail still leads Todd to have sex with her again. Todd then tries to explain to Melissa, but they end up making out. 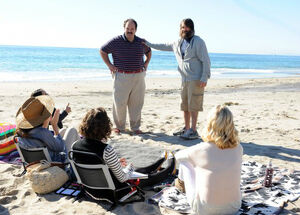 As soon as Tandy asks Todd for his sperm, he hesitantly agrees, but admits he might be a little low on his sperm count. He then proceeds to explain his current situation, but admits he isn't sure what to do, as he doesn't want to hurt Melissa or Gail, but Gail then comes out, leading to the same thing happening again. Later that day, Erica runs into Todd, leading Erica to admit Todd's a good person, and also admits that Phil wanted Todd to be the father to their baby. Todd hesitantly accepts, leading to the two to share a kiss, where Todd believes he has become a "monster". Running to the beach out of anger, he finds a jet-ski and releases his anger while riding it.

As Tandy and Todd are both angry at themselves over their actions, they agree to tell the truth, when Gail invites everyone to the beach. As Tandy is about to tell Carol, the group sees Todd coming off the jet-ski, as he reveals his flings to everyone. As he explains that he didn't want to hurt anyone, he is soon misinterpreted by everyone when Todd says they all could work it out. When Tandy then tells Carol, Carol is distracted by someone running on the beach. Tandy discovers that the person in question is his brother Mike and they run towards each other where Tandy punches him in the groin.

Previous Episode /// Fish in the Dish \\\ Next Episode

Retrieved from "https://thelastmanonearth.fandom.com/wiki/Fish_in_the_Dish?oldid=9499"
Community content is available under CC-BY-SA unless otherwise noted.