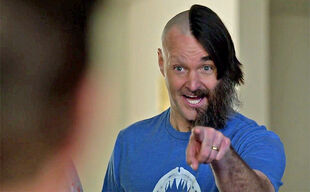 Fourth Finger
Tandy and Mike engage in a prank war. 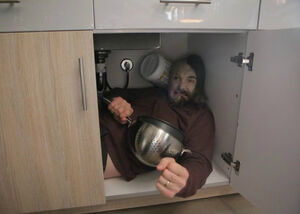 After Mike shaves half of Tandy's entire body, Tandy is angry over what Mike did. When Carol later suggests that he shave it off, Tandy argues that it would give Mike the satisfaction and decides that he must get revenge on Mike, much to Carol's dismay. Later that night, Tandy plants poison ivy in Mike's sleeping bag, but when Tandy notices a gift for him, he opens it and gets sprayed with blue ink. As he cannot remove the ink off, he covers it with some of Carol's makeup powder. When he learns the next day that Mike found a new place to sleep, he follows him to the house he is staying at. When he tries to replant the poison ivy in his house, he is caught by Mike who forces him to rub it on his testicles. As Mike swears to get revenge back, he gets his revenge by placing Tandy's bed on top of a large cliff, leading Tandy to wake up and fall off the cliff and land on a large inflatable mattress, which drives him to despair of ending the prank war. 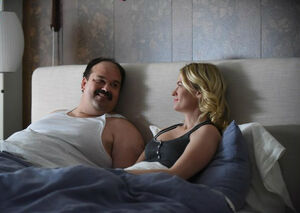 Meanwhile, Todd's situation between Gail and Melissa has become complicated as he is now "sharing" them. As Todd tries to lie about going to see Melissa, Gail tells him to be honest, however, Todd's revelations become a little too much for the girls. As Todd is busy trying to help and contribute to everyone, Tandy has become scared of Mike and enlists Todd to help him out. Todd helps Tandy out by shaving half his entire body too. When Mike sees this, he believes things have gotten out of hand.

As Tandy believes the pranks have just began, he shows Mike a letter from his parents to Mike and threatens to burn it if the pranks do not stop. Tandy locks the letter in a safe, but Mike easily gets into the safe, reading the letter. As he reads, he finds it is a fake letter written by Tandy, upsetting Mike.

Later that night, Todd comes out and shows the ladies his new look, while at the same time establishing his dominance by showing the group he can give everybody time, whether helping out Tandy, being in a relationship with Gail or Melissa, being the father to Erica's baby, and even helping out Carol.

After disappointing Mike and looking at some pictures, Tandy brings Mike the real letters from their parents and apologizes for what he did. Mike accepts his apology, however, Mike forgets about one last prank, but the two smirk at each other and patch things up. Later that night, Carol goes to Todd in the kitchen and accepts Todd's offer to help her. She then asks him to inseminate her, which he happily accepts.

Retrieved from "https://thelastmanonearth.fandom.com/wiki/Fourth_Finger?oldid=9119"
Community content is available under CC-BY-SA unless otherwise noted.