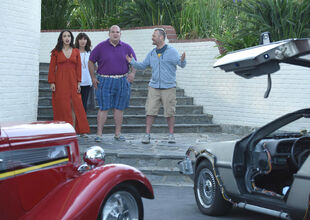 General Breast Theme with Cobras
No one can agree on what to do when armed intruders head their way. 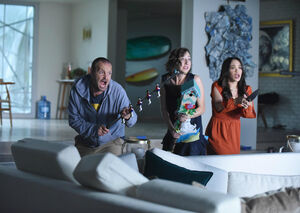 As the group continues to watch Pat and the intruders, they point towards the mansion and rush out. Carol unlocks Melissa from the stocks and grabs her shotgun. Phil, Todd, Gail, and Erica rush towards their vehicles, but Todd's A-Team van blocks them out and they struggle to find the keys. They fail to find them and grab the only nearby objects to use as weapons as they come up the steps. As they come inside, Todd notices the Mr. T key chain and reaches for it, but accidentally sets off its ringer and exposes the group. Chaos emerges, but is shortly stopped when Melissa comes out with her shotgun, but Pat tells Melissa to put her gun down, leading her to shoot Darrell. A funeral is held for Darrell with both Lewis and Pat attending. The group then contemplates about letting the two join the group. Despite everyone not wanting to bring Pat in, Phil convinces them anyway. Meanwhile, Pat tells Lewis in confidence not to ruin anything, in order to get a "fresh start." 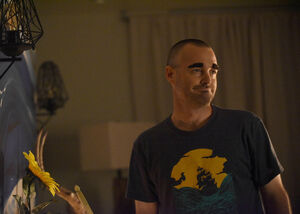 Just as Phil and Pat begin to bond over Pat's designer jean art, Carol gets Phil some eyebrows in order to read his emotional states. Elsewhere, the group is still put off about Pat, especially when he gets in their faces when they make a joke about Phil's eyebrows. As Phil and Pat go blow up the Santa Monica Pier, the group gets Lewis to confess about Pat. Lewis then confirms that Pat is delusional and had murdered a person as well.

Later that night, Phil and Pat return to the mansion. With Pat out of his hazmat suit, he thanks the group for bringing him in. As Pat begins to experience life out of his hazmat suit, the group tells Phil about what Pat had done, but Pat then notices the photo with Phil and Mike in it, leading him to bring out his gun. Pat threatens to shoot Phil as he believes that Phil wants to infect him with the virus. The group immediately runs out to the A-Team van with Lewis. Pat tries to blockade the van, but Todd runs over Pat as the group screams in terror.

Retrieved from "https://thelastmanonearth.fandom.com/wiki/General_Breast_Theme_with_Cobras?oldid=8605"
Community content is available under CC-BY-SA unless otherwise noted.