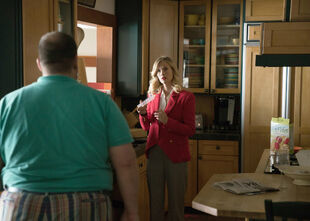 Hair of the Dog
Phil and Todd attempt to help Melissa's mental state by going to her hometown. 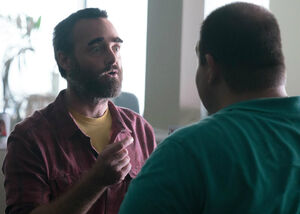 As Gail walks out of the open elevator, she opens the doors to the outside and runs into Phil. She goes up to the common room and the group welcomes her to open arms, however, she passes out. She then wakes up and explains her story of being in the elevator. As the group hugs in celebration of her being okay and back, they explain the situations with Lewis and Melissa.

Later on, Todd gets an epiphany to go to Akron, Ohio with Phil and Melissa to investigate her situation. While on the road, Melissa tries to emotionally hurt Phil as he tries to ignore her. When they arrive, they discover she gave them a fake address and in the morning, she ends up missing. When they go on the road, they spot an Akron Home Associates billboard with her on it. They go to the location and spot her address on a magazine. When they arrive at her house, they spot her safely in her bed.

In the morning, Todd becomes upset as he learns things that he never knew about Melissa. Phil suggests things will be okay, but Melissa comes down wearing her former work blazer and prepares herself breakfast. She then takes a pill from a pill box. Todd questions what it is but Melissa is unsure. Phil, Todd, and Melissa drive back to San Jose in question of what the pill is. 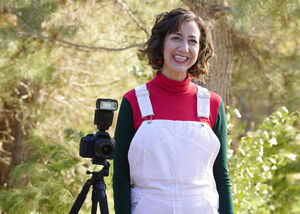 Meanwhile with Gail back, Carol begins to "mellow out". She gives Gail her bed in her wooden house made by Phil. Erica also gets Gail a mobility scooter and Carol interrupts making the conversation awkward. Later on, Carol gets Gail some tortilla chips and rambles on about how she really isn't her mother. She tries to give Gail a cigarette and questions her fakeness, which makes Carol reveal that she doesn't want Gail to leave again. Carol and Gail soon make up and plan to take the family photo that she had wanted to. They take the photo together, but Carol soon discovers someone moving in a Yoda mask in the backgrounds of her pictures.

Previous Episode /// Hair of the Dog \\\ Next Episode

Retrieved from "https://thelastmanonearth.fandom.com/wiki/Hair_of_the_Dog?oldid=8616"
Community content is available under CC-BY-SA unless otherwise noted.