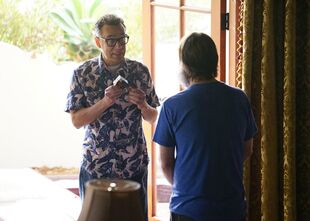 Hamilton/Berg
Phil and Todd try to convince the rest of the group that something is majorly wrong with Karl. 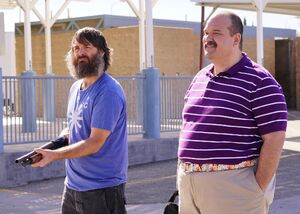 After witnessing Karl eat pieces of a corpse, Phil and Todd attempt to tell the others, who refuse to believe what they are hearing. When Karl returns to the mansion, he is confronted by Phil and Todd, as the others still don't believe until Karl admits it. Karl confirms to the group that he is a cannibal, to their shock and horror since Phil was right. Karl goes to bed while telling everyone he'd answer their questions in the morning. However, the group restrain and question Karl immediately and he answers them in bizarre and crazy ways which only scares them more. The group come up with ideas on what to do with Karl and they decide to lock Karl back into the prison where he was found.

Meanwhile, Melissa visits Jasper to ask him if he is ready to rejoin the group and he declines silently. When Todd drives past the prison during his search for Jasper, he notices the gates unlocked. Todd alerts the group about Karl's disappearance and in the midst of the panic, Melissa sets off to go retrieve Jasper and reveals to the others that she knows where he is. 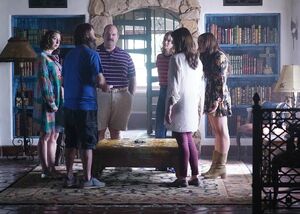 Before she can be confronted, Karl's piano playing in the next room alerts the group. They come to the realization that Karl will not go away and the only answer they can come up with is to execute him. The six members draw straws and the owner of the shortest straw is to perform Karl's execution. Carol draws the shortest straw, but Phil cuts his straw to a smaller piece to do the execution for her. As Phil prepares to kill Karl, Karl solves the Rubik's cube, which explodes almost immediately, thus killing him.

Retrieved from "https://thelastmanonearth.fandom.com/wiki/Hamilton/Berg?oldid=9505"
Community content is available under CC-BY-SA unless otherwise noted.