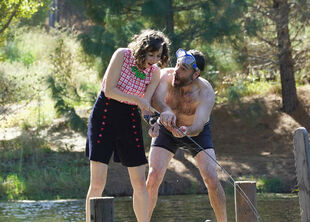 Big smiles on their faces.

If You're Happy and You Know It
Phil and Carol celebrate the honeymoon they never had. 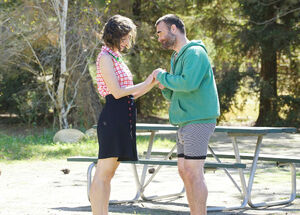 When Melissa comes up with no remembrance of the last few days, Erica suggests that they keep her contained in a focus group room until she gains some sanity, but Todd disagrees. Meanwhile, Carol shreds her adoption papers as Todd has given her a wake-up call from her "world of make believe". But with her spirits beheaded, Phil decides to toast themselves to the honeymoon they never had.

Phil brings Carol to the forest and shows her a recreation of where they first met. He also thanks her at the campsite for helping him change his ways. Phil then takes her fishing by using coats and paintings to fish for, but she then notices the fishing pole moving and reals it in to discover an actual live fish. They try to discover the fish's gender and they name her after Gail. In celebration, they have honeymoon sex with a camping theme. After sex, they walk outside and discover the fish outside of the water bucket. In an effort to save it, Phil tries mouth-to-mouth, but Carol says to stop as she's gone. 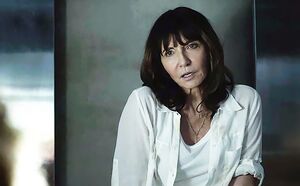 Meanwhile, Gail tries to escape the elevator one last time by using the hair from the Gordon dummy to be consumed by the Roomba. It works so far, but when she sticks a note to it, it falls off and is vacummed up. In frustration, she shoots the Roomba and the ceiling, but ends up firing a bullet into her leg. She then comes to a realization that she probably won't be found.

Elsewhere, Todd tucks Melissa goodnight and sleeps outside of her room in fear of her endangering herself or others. When he wakes up the next morning, he finds her missing from her room. While Todd searches for Melissa, he interrupts Lewis and Erica's flight simulation with Lewis angry that he cannot land his aviator plane properly. When outside, Todd tells the two the truth that she's missing and Erica ends up spotting her on the edge of the roof.

Todd begs her to come down and they go on a walk to the focus group room. While Erica and Lewis bring her stuff, Todd confronts Melissa about the situation. Despite her not wanting to be in there, Todd locks the door anyway for her own good as Melissa screams that she can't get out.

When burying the fish, Phil and Carol grieve, but soon discover the fish flopping in the water, leading them to hug with excitement. As the episode ends with a montage, Phil and Carol return home with the fish and place it in Phil's pool, Lewis successfully lands the aviator plane in the simulation and celebrates with a hug from Erica, Melissa shouts for Todd as he cries from outside the focus group room, and Gail loads her final bullet into her gun. A gunshot is then seen and heard from outside the building.

Previous Episode /// If You're Happy and You Know It \\\ Next Episode

Retrieved from "https://thelastmanonearth.fandom.com/wiki/If_You%27re_Happy_and_You_Know_It?oldid=8613"
Community content is available under CC-BY-SA unless otherwise noted.