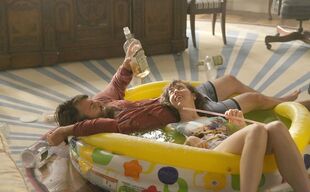 Living in the White House.

Is There Anybody Out There?
Phil and Carol continue their roadtrip through the United States. 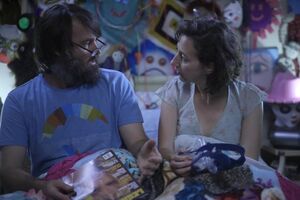 Six months after being banished from Tucson, Phil/Tandy and Carol continue their roadtrip. After driving a stealth bomber the whole day, they settle in at the White House for a night of shenanigans. However, Carol still doesn't feel like she is at home and the two head off from the White House. The following morning, Phil surprises Carol by taking her to her old apartment. Carol shows Phil some photos of old friends and family, and her bedroom. However, Carol still doesn't feel comfortable and wishes to go back to Tucson, which leads into an argument between the two.

The next day, the two get back on the road and stop at an EMCO gas station in Oklahoma to refuel. While Phil refuels, Carol goes into the gas station without Phil's knowledge. Phil begins to drive off and Carol attempts to get his attention, but fails. Hours later, Phil notices her disappearance and drives back to Oklahoma. Believing that Carol was at a Speedy Pump, he travel to every Speedy Pump in Oklahoma, but fails to find Carol. While in the RV, Phil looks at Carol's sketchpad and believes she has went back to Tucson. Phil arrives in Tucson in front of the cul-de-sac. While camouflaged, Phil notices that the cul-de-sac is deserted. Phil looks at all the houses and sees that his house was looted of the artifacts and burned. Walking into his house, Phil picks up a photo of his family and wonders where the Tucson survivors are and where Carol went. 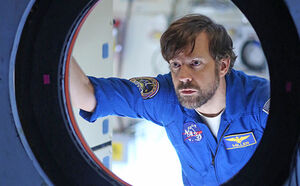 Meanwhile, Mike Miller is still stuck in space and talks to some worms for companionship. However, one of the worms die and Mike releases him into space. Later that day, Mike thinks about leaving via the descent module but believes it is too risky. Moments later, another worm dies, and Mike sends him off into space as well. The episode then ends with Phil sitting alone on the couch in Tucson, Carol stuck at the EMCO gas station, and Mike remaining in space.

Previous Episode /// Is There Anybody Out There? \\\ Next Episode

Retrieved from "https://thelastmanonearth.fandom.com/wiki/Is_There_Anybody_Out_There%3F?oldid=9105"
Community content is available under CC-BY-SA unless otherwise noted.