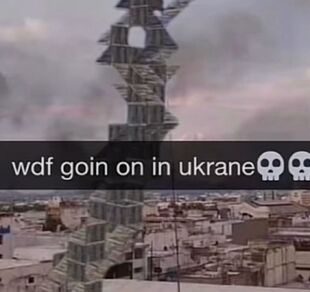 Moved to Tampa
Phil decides to alter his billboards to prevent more men from showing up. 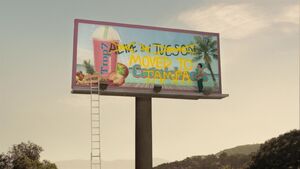 With Phil's recent divorce from Carol, Erica and Gail get interested in him and schedule separate dates with him. To prevent anybody else from coming and ruining his chances for love, he alters his "Alive in Tucson" billboards to "Moved to Tampa". But when he starts working on his first billboard, the ladder ends up falling flat on the ground. Phil soon starts to get dehydrated and and sun burnt and passes out unconscious.

Erica and Gail realize that they have been stood up. Carol talks to them and they soon presume Phil is dead. Before leaving to search for him, an unknown survivor pulls up carrying Phil. They learn that he is also named Phil Miller and has been a former contractor and was in the Special Forces. Due to them having the same name, they play a game of Jenga to decide who will keep their name. With the original Phil losing the game of Jenga, he is forced to be called by his middle name, Tandy. Tandy later finds Carol heading with a thank you gift for the new Phil and that she has a romantic interest in him too. 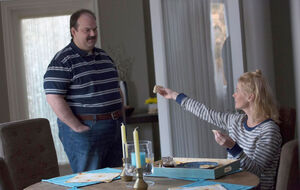 Meanwhile, Todd continues to cook Melissa heart shaped pancakes in an effort to get her to say "I love you" back to him. Todd questions her on it and Melissa admits she is scared to say it back as she doesn't want to screw the relationship up. The two soon patch things up, when Melissa accidentally says "I love you" to Todd. Todd then promises that everything will work out fine with a happy Melissa agreeing.

Retrieved from "https://thelastmanonearth.fandom.com/wiki/Moved_to_Tampa?oldid=9100"
Community content is available under CC-BY-SA unless otherwise noted.