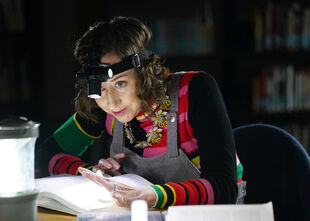 Research at the library.

Nature's Horchata
The long term consequences of surviving an apocalypse start to have a major impact on the group. 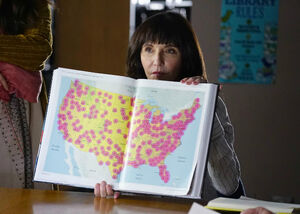 Phil alerts the group of the nuclear plant melting down and they decide they need to get as far away from San Jose. When he returns, Carol tells Phil about her good experience watching Erica give birth and tells him that she feels happy and has the perfect home to raise a baby in. Everyone packs up their things, including Lewis' remains with a dustbuster and gets on the road as the following day, Carol discovers that she is on the road.

He explains to her through a song about the nuclear meltdowns as Erica tries to breastfeed Dawn. The group also learns that they forgot to bring the cow. They stop at a library and learn that they will be safe if they are about one-hundred miles from reactors, but discover the United States is entirely covered in reactors. They settle on Mexico to go to, despite the fact the book they used as a resource is entirely outdated. Todd announces that they are about seventy-two miles from Tijuana, but Phil's geiger counter soon goes off, revealing that potential radiation is nearby. They travel back the same way and discover Los Angeles is the only place that they can go through to get towards Mexico. They worry about Pat Brown coming and finding them as well. 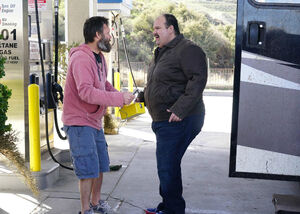 When they stop at a gas station, they hurry as quickly as they can for supplies and necessities as Phil confides to Carol that everything will be okay and even sets up some candles and music in her house. Erica also tries to breastfeed her baby while Phil tries to convince Dawn to "do it and try". They eventually arrive in Los Angeles, California where Carol questions whether Pat will find them. Despite Phil's plead that he is probably dead, Carol's house catches on fire, where Pat's ice cream truck spots the big cloud of smoke. 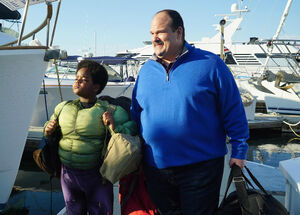 They arrive to a marina where they discover Carol's house has caught fire. Erica also gets Dawn to successfully get breastfed. The group chooses a boat as quick as possible, but are delayed due to Phil's long speech. It doesn't help the group's situation to avoid Pat anymore as he is slowly coming towards them. He eventually reaches the boat and holds Phil at gunpoint. As soon as Pat prepares to shoot Phil, Pat is shot in the head and falls and reveals to have been shot by Pamela Brinton.

Retrieved from "https://thelastmanonearth.fandom.com/wiki/Nature%27s_Horchata?oldid=8622"
Community content is available under CC-BY-SA unless otherwise noted.