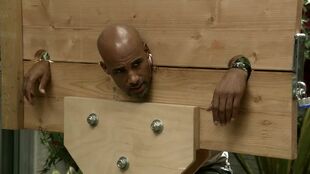 Phil is in the stocks.

No Bull
Phil finds himself on Tandy's level of trouble. 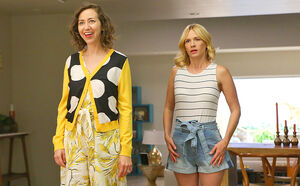 Tandy attempts to show the group that Phil has put himself in the stocks, only to be interrupted by Todd, who tells them to go outside. As they go outside, they find that the cow has given birth to a baby cow. Realizing that there is a bull somewhere within the area, they head out on a search to find it. As the crew prepares to search for the bull, Todd runs into Gail making out with her Gordon dummy.

Believing that Phil could be a big help to find the bull, Tandy unlocks him from the stocks, only for him to drive off in his truck off to Canada. While on the search, Todd runs into Gail, who explains the reasoning for having her Gordon dummy. On a lunch break, Tandy tells the crew that Phil had driven off, instead of looking for the bull. They immediately go back to continue the search, as they aren't interested in Phil. Returning from the hunt, Melissa and Todd officially break up. Going to Gail for comfort, Todd and Gail share a kiss.

In order for the crew to start looking for Phil, Tandy explains the flaws of everyone. The crew members soon verbally attack each other with insults, until Tandy smashes a window, in order to get them to stop. The following day, as the crew are on the couch, they look up to see the bull. After, shooting the bull with tranquilizers, Phil reveals himself to have brought the bull back. That night, Phil comes out and requests to be put in the stocks, but they invite him to their steak dinner and welcome him back into the crew.

Meanwhile, Mike Miller attempts to fix his radio, while in the International Space Station. After fixing it, Mike attempts to contact anybody. Switching between radio stations, Mike believes he has found somebody. However, he finds out that it was an echo of his own voice. With himself angry, Mike breaks the radio and various things inside I.S.S. Later on, Mike inhales a large amount of nitrous oxide.

Previous Episode /// No Bull \\\ Next Episode

Retrieved from "https://thelastmanonearth.fandom.com/wiki/No_Bull?oldid=9113"
Community content is available under CC-BY-SA unless otherwise noted.