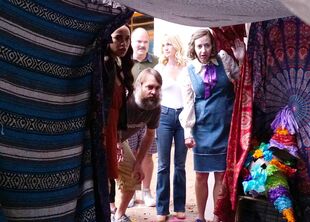 Not Appropriate for Miners
Todd asks Phil for parenting advice when he notices that Jasper is acting more reckless than usual. 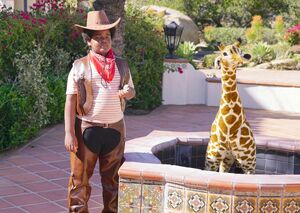 When Jasper becomes more reckless than usual when driving a limousine and blowing up a stuffed giraffe with a firework. Todd attempts to parent him by grounding him, but his efforts fail to work and goes to Phil for help. Meanwhile, Carol becomes disgruntled when Erica and Gail joke about Jasper having affection for baby Dawn. Carol attempts to get Jasper to "get to know" Bezequille and Mike. When Erica spots Carol continuing to get Jasper to feel affection for the twins, including them wearing make-up, she becomes annoyed and confronts Carol. She later falls into the pressure and the two feud for Jasper's attention. 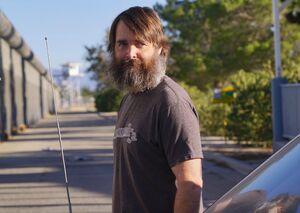 Todd takes away Jasper's video games, as Melissa tries to solve the Rubik's cube, where she is interrupted by Jasper. The entire group all get into a big argument about Jasper, before Melissa comes in to make them realize how they are acting all like lunatics. But when they go to apologize to Jasper, they realize he has run away. They go on a search for him where both arguments end and they all apologize to each other. During their search, Phil and Todd hear a continuing siren wailing where they travel to a prison, where a prison inmate resides.

Previous Episode /// Not Appropriate for Miners \\\ Next Episode

Retrieved from "https://thelastmanonearth.fandom.com/wiki/Not_Appropriate_for_Miners?oldid=8828"
Community content is available under CC-BY-SA unless otherwise noted.