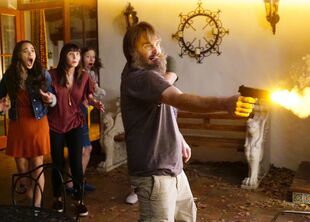 Paint Misbehavin'
Karl is welcomed to open arms by the group. 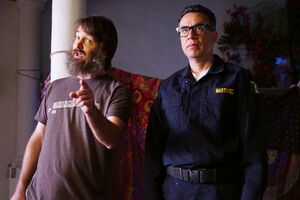 Phil and Todd introduce Karl to the group, who are keeping up their efforts to find Jasper. Karl decides to lie about his cannibalistic prison past and adopts the persona of a prison guard. When Gail later burns her finger, Karl struggles to not to take one of her band-aids from the trash and is attempting to change for the better, but Phil becomes suspicious of his behavior after he showcases a bad piano rendition of a song and is caught digging through Gail and Erica's trash. The group dismisses anything wrong with Karl, because of Phil's terrible judge of character.

Phil later discovers Karl drinking tea and consuming Gail's band-aid. Karl helps Gail with her finger and consumes one of the ice cubes she was using for her finger and offers to paint her for Erica's upcoming birthday. Meanwhile, Melissa leaves a cooler for Jasper, who takes it to an unknown place. Back at the mansion, Phil manages to get Todd to help him out with Karl by telling him about the band-aid situation.

Karl begins painting Gail and struggles not to go through with killing her. He runs off and Gail notices the poor quality painting. Phil and Todd follow Karl to a nearby cemetery and watch him dig up a corpse and eat a piece of it.

Retrieved from "https://thelastmanonearth.fandom.com/wiki/Paint_Misbehavin%27?oldid=8880"
Community content is available under CC-BY-SA unless otherwise noted.