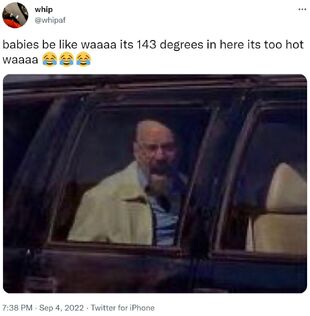 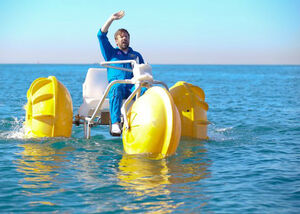 Mike's space capsule ends up crash landing on Earth into the middle of a cruise ship in the Atlantic Ocean. Being able to escape the sinking ship, Mike uses an Aqua-Cycle and travels the ocean for three days. Mike exhaustion ends up causing him to dream of arguing with a younger Phil, but is soon convinced by young Phil to wake up and continue his journey. When Mike wakes up, he spots a sailboat, and travels there only to find it deserted. He begins to make himself at home, but his comfort is soon interrupted by a man with a harpoon gun.

Mike attempts to let him know who he is and his story of how he arrived on his boat. The man then trusts Mike and introduces himself as Pat Brown and allows Mike to stay on his boat. While bonding and drinking, Mike questions the possibility of immunity from the virus. Pat however tells him that there is most likely no one as every single city is deserted and "pitch black". Later that day, Mike once again asks to go on land, but Pat declines, but later changes his mind, only if they wear hazmat suits. 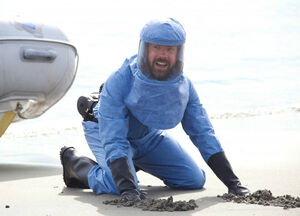 Upon arriving on shore, Mike expresses happiness to be on land, but Pat's delusional beliefs end his happiness quickly., After getting an ice cream truck and entering Miami Beach, Florida, Mike questions where the bodies may be. Driving to a triage operation area, Pat explains that most people died within a triage operation located in every city, or had died in their own homes, due to internally leaking out blood through every hole of the body. Before leaving Miami Beach, Pat and Mike play a game of tennis. As they head back to the boat, Mike notices that a billboard has writing on it, as Pat tries to avoid showing Mike the billboard. Stopping the truck, Mike exits the vehicle quickly, only for Pat to hit him in the back of the head with a wrench. 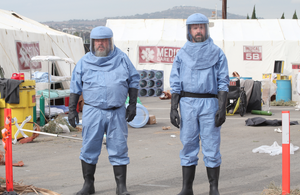 An unconscious Mike dreams of young Phil again, only for Phil to pee on him. He then wakes up to find Pat disinfecting him from the "virus". Despite Mike's plead to go to Tucson, Pat's crazily beliefs that the government is behind everything prevent him from ever going. When Pat puts the gun down, the one he was using to shoot the uncooperative Mike, Mike attempts to reach for the gun, leading to a tussle between the two, but shortly ends when Pat knocks Mike out again with a rock. As Pat gets up, he notices a rip in Mike's hazmat suit and proceeds to place him in the triage operation. When Mike eventually wakes up in a body bag, he takes one of the ambulances and heads in the direction to Tucson.

Retrieved from "https://thelastmanonearth.fandom.com/wiki/Pitch_Black?oldid=6136"
Community content is available under CC-BY-SA unless otherwise noted.