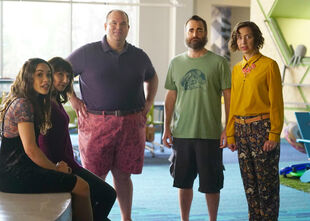 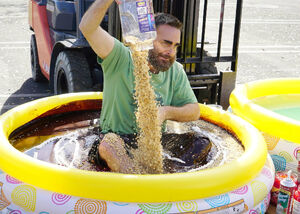 After returning to the building, the group manages to get the child to take off his Yoda mask by bribing him with pizza. They attempt to learn his name, but he refuses to talk. They settle on the name "Jasper" temporarily, as Phil tries to bond with him by setting up one of his margarita pools with a "sundae" pool as he is underage, but this fails. He tries to give "Gary", one of his sports balls, to "Jasper" as a friend, but he throws it over a nearby ledge, where "Gary" is ran over by Erica's car.

Phil attempts to fix Gary, while receiving advice by Carol that he should do something if he is misbehaving. When he confronts "Jasper", he discovers he has cigarettes and offers to give them back if he shows good behavior. At dinner that night, Phil presents "Jasper" all dressed up and showing formal behavior. But the group immediately discovers he is passing him cigarettes. Erica believes that she shouldn't have anything to do with the child. Phil and the group then decide he should be able to pick his "point person". "Jasper" picks Erica and becomes a little annoyed that "Jasper" did so. 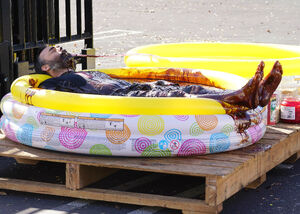 Meanwhile, Todd gives Melissa her medication and thanks Gail for her help. But when he puts his hand on her shoulder, this alerts Carol as she believes that Todd may want to restart his relationship with Gail. He confronts Todd, who is dealing with Melissa and her medication side affects including major sweating. Gail soon tells Carol to stay out of her business with Todd.

Phil becomes depressed and admits to Carol that he worries that their child may not love him. Carol convinces him otherwise and apologizes to Erica for being a "sore loser". She accepts his apology and tells him to say goodnight to "Jasper". He says goodnight and discovers him sleeping with "Gary". He says "maybe just for tonight" and zips up his sleeping tent before quickly unzipping it and taking back "Gary".

Retrieved from "https://thelastmanonearth.fandom.com/wiki/Point_Person_Knows_Best?oldid=8618"
Community content is available under CC-BY-SA unless otherwise noted.