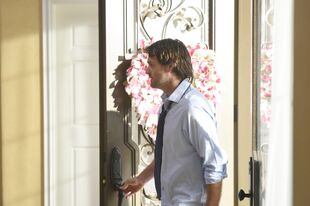 Pranks for Nothin'
When Phil tries to pull off his latest lie as a prank, the group decides to ignore him. 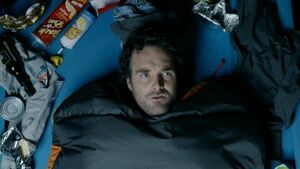 Phil desperately tries to convince that his lie was a prank to the group, but ultimately decide to desert and drive home without him. After walking home, everyone ignores Phil and gives him the silent treatment. When he visits Carol, Carol does the same thing to him, forcing him to temporarily move to the bar. While at the bar, he gets drunk and begins to realize why he blew it, but instead wishes to be changed into another person and dresses up as his "twin brother," "Mike Miller", which ultimately fails at winning over the group. 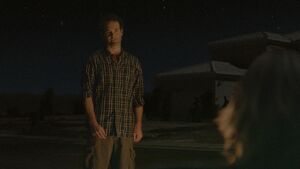 The next day, Phil spies on the gang and is shocked to see that they see him as a frequent liar. Back at the bar, he begins to realize that he is indeed a liar and decides to apologize for his flaws and admits that he never wanted to be married to Carol. Heading back to the bar, Carol shows up with divorce papers. After signing them, they remain good friends and reveal they only wanted to make each other happy.

Meanwhile, Carol has begun to hold a grudge against Erica and Gail, after Phil's incident with them. Erica and Gail try their best to make amends with her, but Carol ultimately rejects. Todd and Melissa then come over only for her to try and get them to passionately make out.

Retrieved from "https://thelastmanonearth.fandom.com/wiki/Pranks_for_Nothin%27?oldid=8571"
Community content is available under CC-BY-SA unless otherwise noted.