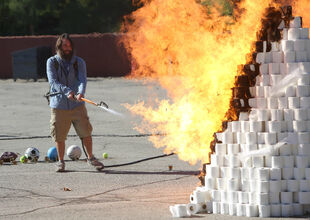 Raisin Balls and Wedding Bells
The marriage between Phil and Carol is threatened by Phil's childish personality. 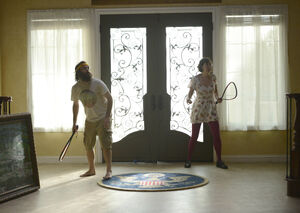 The episode begins with Phil fantasizing the wedding with Carol, which is filled with people, which shocks him and wakes him up. As the day goes on, Carol spends the day preparing for the wedding, while Phil spends the day having a bachelor party with himself. Later that day, Carol contacts Phil to come to the church. He then arrives there and finds the hard work that Carol put into the wedding, but Carol is annoyed that he didn't get the rings; the one thing that he was supposed to do. Out of anger and disappointment, Carol ditches Phil. Phil goes to her house and breaks down her door to find a whole after party set out. He later finds her at Craftsworks, and decides to apologize to her. Phil then heads to a jeweler with Carol for the rings, and gives her a hammer as a wedding gift to choose the ring she wants. They then return to the church and get married, and enjoy themselves with sex at the end of the night. The next day, the newly wed couple enjoy themselves with a day of fun. Phil admits to Carol that the marriage is tolerable, but he soon crashes his truck into a limousine, leading a blonde woman to exit her vehicle to see Phil and Carol.

Retrieved from "https://thelastmanonearth.fandom.com/wiki/Raisin_Balls_and_Wedding_Bells?oldid=6430"
Community content is available under CC-BY-SA unless otherwise noted.