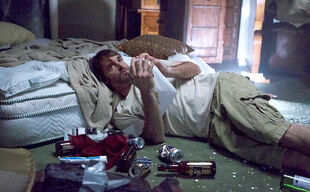 Seeking refuge in his room.

Screw the Moon
Tandy Miller finds himself banished from Tucson. 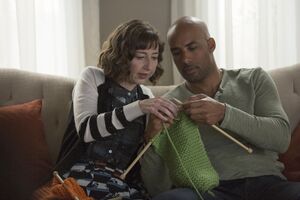 Tandy and Todd continue with their plan to kill Phil, but Todd ultimately backs out as soon as he learns Tandy was going to do the same thing to him; bring him out to the desert to die. While the day goes on, Tandy shows disrespect to Phil, but when Phil presents the group his works on his solar panel contribution, an angry Tandy knocks it over, causing the light to go out and break. Tandy tries to deny that he broke his lamp, but Todd ends up and reveals that Tandy was going to kill him. Deciding that Tandy's antics have been getting out of hand, Phil tells Tandy to leave Tucson. Not wanting to leave Tucson, Tandy seeks refuge in his mansion for days, until Carol invites him out, but as he comes to the couches outside, Phil tackles him down.

Tandy wakes up riding in Phil's truck and isn't sure where he is. Arriving at the desert, Phil drops him off and tells him not to return ever to Tucson or he will be killed. Tandy is left with some surviving essentials but consumes all of it very quickly within twenty minutes. A lonely Tandy lays on the desert ground and waits to die. Tandy wakes up to see one of his sports balls and then to see Carol. Carol admits she would rather be with Tandy, as he is someone who could not go through with leaving someone to die. Carol and Tandy make amends and sings a song to her. Tandy and Carol head off in the other direction away from Tucson in order to start a life elsewhere. Meanwhile, Melissa and Todd become a couple again, upon learning that Todd could have died in the desert. 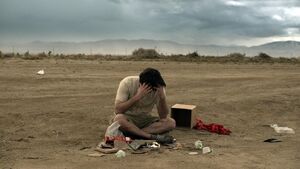 After Tandy and Carol reunite, he admits that he had a brother. In the International Space Station, astronaut Mike Miller attempts to use his radio to contact Houston. Mike is unable to reach Houston and questions what had happened to everybody on Earth. Mike soon wanders toward the window, and looks out and wonders if there is anybody out there.

Retrieved from "https://thelastmanonearth.fandom.com/wiki/Screw_the_Moon?oldid=9104"
Community content is available under CC-BY-SA unless otherwise noted.