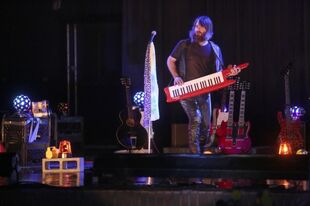 Skidmark
After reuniting with his brother, Tandy throws a party for the group to celebrate.


Plot: After Tandy punches Mike in the groin, Tandy continues to fight Mike over a past crush between the both of them named Christine, but when Mike points out that he's thought about Tandy for years, the two brothers hug it out and reunite with happiness. Over dinner, Mike explains how he made it to Malibu, which eventually turns into Mike revealing some embarassing things about Tandy's past. Mike then questions why the group is calling him Tandy, which leads to Mike revealing Phil's childhood nickname, Skidmark. 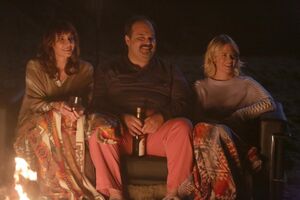 The next day, the group continues to call Tandy by his embarrassing nickname, much to Tandy's dismay, which then leads Tandy to show them his skidmark free underwear. Afterwards, Mike invites everyone to a bonfire where Mike sings a song, which eventually leads to Tandy getting jealous of Mike. In order to regain his popularity, Tandy decides to throw a party, but none of them show up. When the group eventually does, he begins to sing, but when Mike begins to joke around, Tandy begins to get ticked at him and soon explain Mike's faults, leading Mike to go home and vow to get even with him. That night, Carol forces Tandy to apologize the next day, but when Tandy wakes up in the morning, it is revealed that Mike shaved off entirely half of Tandy's body and face.

Meanwhile, Gail, Erica, and Melissa decline Todd's proposal for a four-some, leading Todd to apologize about it. The next day, Melissa and Gail talk about recent events, and admit that they do love Todd, leading them to agree to simultaneously date Todd, much to Todd's happiness.

Retrieved from "https://thelastmanonearth.fandom.com/wiki/Skidmark?oldid=9118"
Community content is available under CC-BY-SA unless otherwise noted.