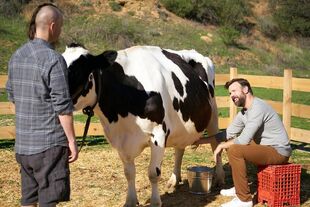 Smart and Stupid
Todd begins to feel left out as Tandy warms up to having Mike back on Earth. 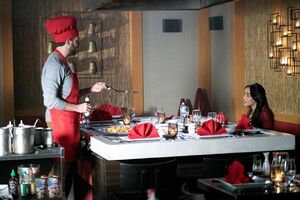 Carol continues to congratulate Tandy for getting her pregnant, but is interrupted by Gail, who tries to tell them about the drone she just saw, but due to her her bizarre descriptions of the drone, no one believes her. Due to this, Gail vows to quit drinking. Meanwhile, Tandy and Mike have finished up the last of the remaining bacon. When Todd walks in and questions it, Tandy admits what happened, but Todd lashes out at him, as he is still angry that he chose Mike over him to be his sperm donor. Elsewhere, Mike and Erica begin to bond and their conversation ends up to Erica admitting she had been arrested for a crime in Adelaide that she didn't commit, but a misunderstanding caused her to be prosecuted. As Mike and Erica continue to bond, they have a date at a Japanese Restaurant. 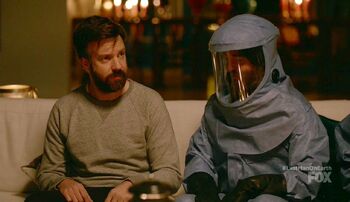 Later that day, as Mike is getting milk from the cow, Tandy offers Mike to be the godfather of their baby. However, Todd comes over and begins to fight with Tandy, but their fight suddenly stops when Mike begins to cough up blood; one of the symptoms of the virus. Just as everyone begins to think the worst, Tandy tries to persuade the group that Mike just has a cold. To keep themselves protected they wear hazmat suits, while they try to play a game. Later on, as Erica talks to Mike and starts to begin to believe Tandy's theory that he is sick, Erica kisses Mike from outside the bubble, but their kiss is shortly stopped when the cow is found dead. The group immediately tries to force Mike out of the house but Tandy objects. With his sudden illness, Mike voluntarily leaves Malibu in the middle of the night, much to Tandy's dismay.

Retrieved from "https://thelastmanonearth.fandom.com/wiki/Smart_and_Stupid?oldid=9121"
Community content is available under CC-BY-SA unless otherwise noted.