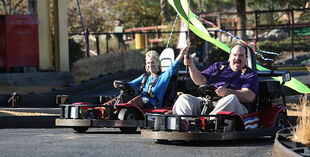 A fun day for Melissa and Todd.

Some Friggin' Fat Dude
Carol tries to set up Todd and Melissa together, while Phil tries to drive them apart. 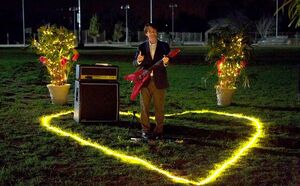 Phil and Melissa's date is ruined by newcomer Todd, much to Phil's anger and disappointment. Phil returns to Carol's house to tell her about Todd. Carol becomes interested in setting him up with Melissa. Meanwhile, Phil desperately tries to woo Melissa with lies about his favorite things that are actually Todd's favorite things.

The next day, Carol invites everyone to a group outing, in order for Melissa and Todd to bond. Carol fakes being sick in order for the two of them to be alone. At Señor Goodtimes, a theme park, the two immediately bond and fall in love, much to Phil's dismay. Phil tries to shame Todd and in order to impress Melissa, but his attempts cause Melissa to love Todd even more, further angering him.

Trying one last time to humiliate Todd, Phil tries to, but when Melissa doesn't buy it, he then reveals his flaws and apologizes to Melissa. Phil even shows her the bar where his "friends" are. They patch things up and find that they have more in common then they think and are glad of their friendship. Phil does then confess his love for Melissa, but when she answers him with a "no" to if she feels love for him to, he pleads it off that he is going to say it to Carol.

Retrieved from "https://thelastmanonearth.fandom.com/wiki/Some_Friggin%27_Fat_Dude?oldid=7937"
Community content is available under CC-BY-SA unless otherwise noted.