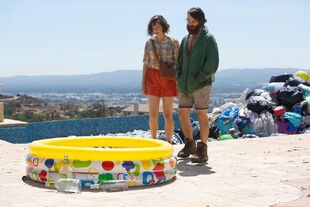 The Elephant in the Room
Carol attempts to show Phil the rules of civilization to prepare him for the re-population of the human race. 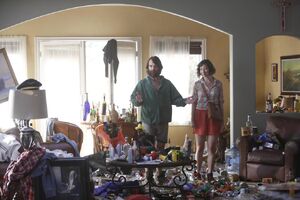 Phil and Carol travel to Phil's house after meeting, where she finds his house is filled with pornography and loads of garbage. While driving her back to the campsite, Phil finds her personality to be annoying. The next day, Phil wakes up in the morning to find Carol cleaning his house, which angers him even more. Carol pleads that she needs to work on fresh food, and he needs to clean his house, which leads them to head to a hardware store. But as soon as he gets there, Phil parks in a handicapped parking spot, much to Carol's dismay, but more arguing leads to Phil ramming the truck through the store entrance.

The following day, Carol moves in next door to Phil, to his annoyance, but Phil soon starts a fight with her, admitting that she thinks he is a slob. Here, Carol also plants a tomato garden, but is having trouble maintaining it as there is no water source. With Phil later stealing her tomatoes at night, and her injuries and failed attempts to fix the water problem, she decides to give up. 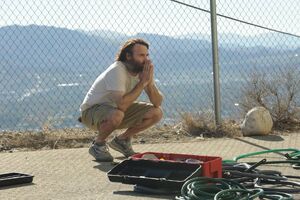 Feeling guilty and knowing the right thing to do, Phil attempts to fix the water problem himself, by using duct tape and his Jenga tower to fix it, along with researching water systems. He eventually fixes it, and scores an invitation to Carol's for dinner. Over dinner, they discuss about the future of the human race. Phil agrees to repopulate with Carol, but Carol pleads that she wants to be married to avoid having "bastard" children. Although it angers him, Phil immediately proposes to Carol.

Previous Episode /// The Elephant in the Room \\\ Next Episode

Retrieved from "https://thelastmanonearth.fandom.com/wiki/The_Elephant_in_the_Room?oldid=7834"
Community content is available under CC-BY-SA unless otherwise noted.