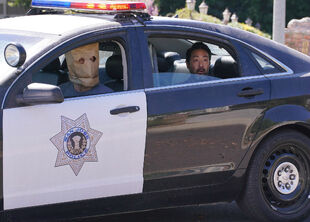 A paper bagged man driving a cop car is out of the ordinary.

The Open-Ended Nature of Unwitnessed Deaths
Phil tries to improve his friendship with Lewis by learning about his past. 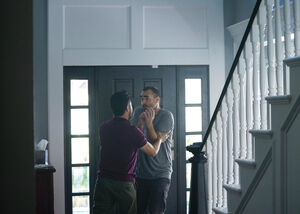 Phil tries to apologize to Lewis for accusing him for what happened to the building's power, but discover that Lewis is depressed as it would've been his anniversary with Mark. Despite Lewis' objection that Mark is probably dead, Phil continues to believe the small possibility that Mark is alive. Phil then tries to convince Lewis to go with him to Seattle, Washington to go to Lewis' old house to see if Mark is there. Lewis ultimately rejects but is tricked by Phil into going.

Lewis becomes ultimately pissed off, but Phil insists that they leave a note just in case that Mark is alive. Lewis still pleads that Mark is dead. Phil then places a paper bag over his head as he thinks Lewis will become attracted to him as he "looks like Mark". They then arrive at Lewis' House. Lewis becomes happy to see old photos of him and Mark. He begins to cry and hears the floorboards creak, believing it to be Mark, but it's actually Phil. Lewis becomes angry and kicks Phil out of his house, but is invited back into the house. Before leaving, Lewis decides to leave a note anyway for Mark. 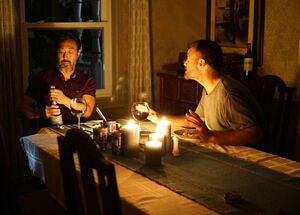 Lewis tells Phil that he left a note for Mark. But when he mentions that he got to see his own brother pass, Phil questions Mike's fate. He goes to Tucson to the Miller House. Entering the house, he views photographs of Mike's heroic accomplishments and some of his more ridiculous ones. As he heads to Mike's door, he cannot come to terms that his dead brother's body may be in there, and decides to leave a note for him as well. He notices his sportsballs and takes Gary with him. Lewis and Phil then return to San Jose, California to the office building. 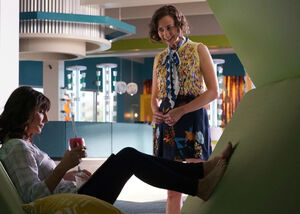 Meanwhile, Carol is upset that her new baby will not have a grandma and asks Gail to consider being the grandma. Carol then thinks that Gail is worried that she won't be attractive anymore with her being titled as "grandma" so she shows her a book, which gets her to accept. She prepares adoption papers, but Gail refuses to sign them as she believes they are "nutty". She goes to Carol's homemade house. They feud like a mother and daughter, until Gail reveals she doesn't want to sign them as she had a son who died from another cause. Carol goes to Gail to apologize for putting the stress on her. She reveals that she did it because she most likely misses her own mother. They tell each other they love each other and Gail officially agrees to sign the adoption papers.

Melissa also tries to get Todd to have a baby with her by role playing as Andy from The Shawshank Redemption. He tries to tell her that he isn't happy with her mental state, but is forced into role playing with her, but she still doesn't get the message that he does not want to have a baby with her because of her state. He yells at her, but she runs off into a hole, after removing a painting of Rita Hayworth, which was featured in the film.

Previous Episode /// The Open-Ended Nature of Unwitnessed Deaths \\\ Next Episode

Retrieved from "https://thelastmanonearth.fandom.com/wiki/The_Open-Ended_Nature_of_Unwitnessed_Deaths?oldid=8610"
Community content is available under CC-BY-SA unless otherwise noted.