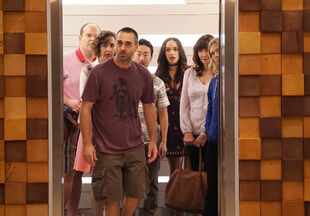 The Power of Power
Phil and the group find a new place to call home. 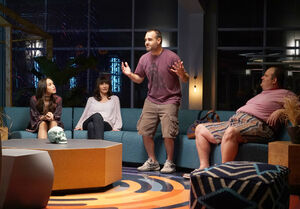 After discovering a self-sustaining office building, complete with air conditioning, power, working toilets, and even frozen pizzas, everyone begins to enjoy their new found home. They also find that the building didn't finish construction as well. Lewis has his doubts about living in an office building, but eventually agrees as the group wants to stay. Phil also gives out floors for everyone to live in as well. However, their new enjoyment comes to an end when the power goes out.

During dinner, Carol has her doubts about living at the building with the power going out. When Phil checks the fuse box, he switches all the switches until the power comes back on. But when talking with Todd, an art display almost falls on Carol, but when they leave, Phil notices a wire cutter underneath the nearby couch and suspects that Lewis may behind it. 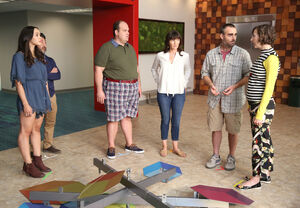 Phil sneaks behind Lewis and places the cutter into his coffee, weirding out Lewis. Later that night, he follows Lewis into the bathroom to tell him he's "watching him", weirding him out even more. In the middle of a shower, the power goes out again. He runs to Lewis to confront him of "what he did" and threatens him to get out of the building and go elsewhere. Phil is interrupted by Carol, who reveals it was her who cut the power. She reveals to Phil about the reason she did it was that she wanted to raise her family in a home. They agree to tell the others, but Carol refuses to go unpunished. While locked in stocks, Phil transports the stocks to a room with a miniature house of her dreams, making Carol feel a sense of happiness.

Meanwhile, Gail interrupts Todd, who is taking a shower from a fire sprinkler inside a cubicle, to tell him that she wants to break up. Todd becomes visibly crushed over this. Todd talks with Phil about the breakup, as well as telling Melissa. Melissa's insanity is briefly stopped as she begins to feel some emotion for Todd. But her insanity increases even more when she burns all her shirts, resulting in her to be shirtless. She also decides she is "ready" to have a baby with Todd, which freaks him out a bit.

Previous Episode /// The Power of Power \\\ Next Episode

Retrieved from "https://thelastmanonearth.fandom.com/wiki/The_Power_of_Power?oldid=8609"
Community content is available under CC-BY-SA unless otherwise noted.