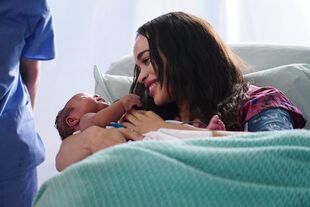 When the Going Gets Tough
Erica goes into labor and prepares for the birth of her baby. 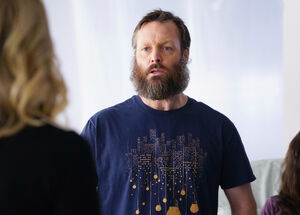 Erica, Gail, and Todd prepare the necessities to deliver Erica's baby with help from Carol and Phil, whom the latter is severely "over-helping". With Erica's birth pains from her contractions, Carol runs off in fear. Meanwhile, Melissa tries to find a place for Jasper to stay for the time being. She tries Carol's place, but Carol's fear of Erica dying bids her to go elsewhere. When Phil returns from getting them a washcloth, he reveals himself to be in a mask of Phil (II) as Erica statement of how she misses him. Melissa eventually takes the mask off and gets the group to agree to take Jasper to the park. Melissa eventually discovers Carol writing an obituary for herself in fear of dying during childbirth. 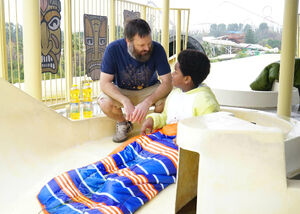 Erica eventually passes out due to a lack of oxygen, but with the group all at her aid, they get her smelling salts to wake her up. They soon find out the baby isn't in the right position and must turn the baby around themselves. Meanwhile, Phil and Jasper go to a waterpark where Jasper admits he is upset that Erica is going to die. Phil convinces him otherwise and they go down the slide with rafts coated in vegetable oil. He explains to Jasper about how the sounds Erica were making were natural and convinces him that everything is fine, but they eventually see a big fire in the distance. 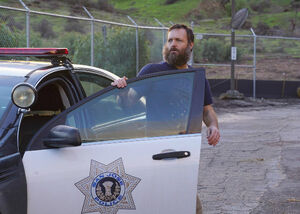 Gail, Todd, Melissa, and a now confident Carol help turn Erica's baby in the correct position with Carol providing commentary. They eventually turn the baby with Gail delivering the baby successfully. As the group expresses happiness and tears, Erica names her new baby girl, Dawn, because it's "the dawn of a new day". Meanwhile, Phil and Jasper rush quickly in Phil's police car over to where the fire is and discover that the building on fire is a nuclear plant that has now exploded.

Previous Episode /// When the Going Gets Tough \\\ Next Episode

Retrieved from "https://thelastmanonearth.fandom.com/wiki/When_the_Going_Gets_Tough?oldid=8621"
Community content is available under CC-BY-SA unless otherwise noted.