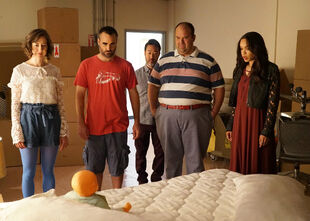 Whitney Houston, We Have a Problem
Phil, Carol, and Todd go on a search for a missing Melissa and Gail. 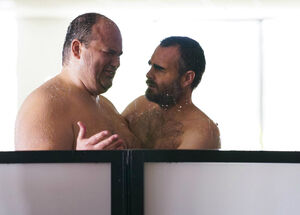 After Melissa leaves a note saying "Goodbye", Phil tries to interpret the message, before leaving to search for Melissa. They get in their cars, but while waiting for Carol, Gail hears them while still trapped in an elevator and tries to use her gun to gain their attention, but Phil's horn beeping prevents them from hearing the fire. They head off anyway, but a few hours later, they call off the search for the night, while Todd disagrees and stays up all night to find her.

The next day, Phil uses a dinosaur suit to attempt to find Melissa, as Erica and Lewis plan where to search next. Todd returns to get a few bare essentials to continue his search, as Carol questions Gail's absence. The five remaining group members continue their search for Melissa. During the search, Carol's shouting for Gail frustrates Todd, while the group becomes tired as they most likely believe Melissa will come back when she wants to. He becomes even more frustrated when the group wants to call it quits. As Todd becomes sleep deprived by his tiresome searching, he falls asleep in the shower and wakes up crying about Melissa. Phil tries to comfort him, but Todd eventually realizes that her recent Shawshank role playing may hint to her going to Zihuatanejo. 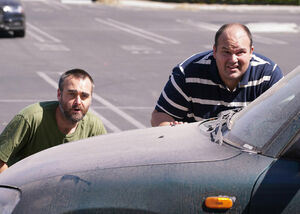 While Carol becomes depressed about Gail's absence, Phil offers to help search with her as well, but his promise to Todd interferes with it. Carol and Todd argue back and forth, before Todd lashes out at Carol that Gail left because of her. Phil talks to Carol and admits that she probably did leave because of her. Carol decides to help Todd and Phil search for Melissa, as Gail probably didn't want to be found or bothered with in the first place. On the way to Zihuatanejo, they spot Phil's prison bus in a nearby parking lot. They search Eddy V's and also find the bus dead, but Carol notices a pizza delivery car, which resembles one in the building's parking lot.

Meanwhile, Gail remains stuck in an elevator in another building of the complex. She attempts to use a bar of a lawn chair to pry open the doors. But with it unable to fit, she rips the head off of the Gordon mannequin to pry the bar in. Things seem good for her, only for the emergency elevator lights to go out completely. Gail eventually opens the elevators doors but a solid wall comes up. She then notices a little light and sees the floor of one of the levels.

As Phil, Carol, and Todd return to the building, they spot the car. In an attempt to gain their attention, Gail fires her gun and they notice the sound. They plan to go inside the building that Gail is in, but a surprise by Melissa prevents them. Gail struggles to find more bullets for her gun. Even though Phil spectates that the gunfire came off from the inside, he shrugs it off as Gail remains stuck in the elevator.

Previous Episode /// Whitney Houston, We Have a Problem \\\ Next Episode

Retrieved from "https://thelastmanonearth.fandom.com/wiki/Whitney_Houston,_We_Have_a_Problem?oldid=8612"
Community content is available under CC-BY-SA unless otherwise noted.